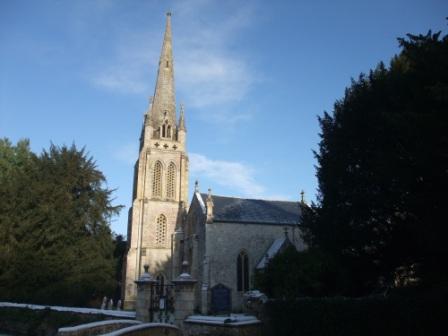 There are suggestions that there was a church already standing in Teffont Evias in 1100 when Harold Ewyas of Hereford was its overlord. There is no record of a church, however, until 1200, and the earliest known rector was appointed in 1298. There was no known dedication of the church until 1965, when it was decided to adopt the title of the Church of the manor of Ewias Harold in Hereford: St Michael and All Angels. The Church of Teffont Evias was accordingly dedicated by the Bishop of Salisbury on 29th September 1965, the Feast of St Michael and All Angels

The Exterior of the Church

The church is built of local Chilmark stone. It is similar to the stone used for the building of Salisbury Cathedral, but incorporates re-used material of 12th century origin. The Chancel retains some medieval walling and the north chapel was added in about 1450. The latter is the oldest part of the church which can be dated with certainty.

A drawing by J. Buckler (circa 1806), which hangs on the west wall, shows the church was originally a much simpler building without pinnacles or separate tower. The church as we see it today is the result of extensive restoration carried out by the architect, Charles Fowler, from 1821 onwards, under the direction of John Mayne. The spire and third stage were added some time between 1830 and 1843 by a talented young architect, George Gilbert Scott, who went on to work on Westminster Abbey and Winchester, Ely, Hereford and Salisbury cathedrals.

In 2011 stonemasons worked on the tower and spire of Teffont Evias church. Using rope access, they removed the greenery from the base of the spire as well as taking out some damaged stone which will shortly be replaced by new pieces cut to measure. They commented that from where they were working, the church looked as if it was in a good state of repair.

The Interior of the Church 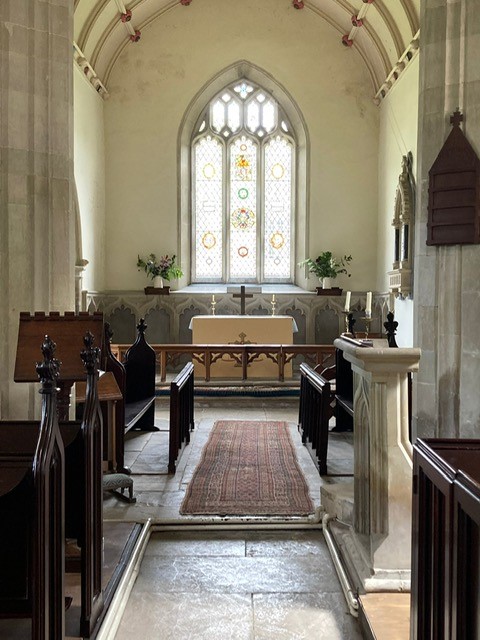 The north-east corner of the church contains an impressive tomb with three stone effigies shown in armour. The oldest is of Henry Ley who purchased the manor of Teffont Evias from King Henry VIII in 1545 and died in 1574. The others are of two of his six sons, William who died in 1624 age 80 and Matthew who died 1632 age 87.

At the western end the font consists of a massive 'rude stone' bowl probably dating from the 12th or 13th century. Most of the woodwork of the church was installed when the church was restored in the early 19th century. The altar in the north chapel, however, is a 17th century communion table which was originally in Teffont Magna Church. There are three bells, the oldest of which is inscribed Mr William Leye 1611. The windows of the church contain a fine collection of roundels of 16th – 17th century stained glass. The roundels are believed to have been brought back from Holland by John Mayne in 1819 when he made his grand tour of the continent. 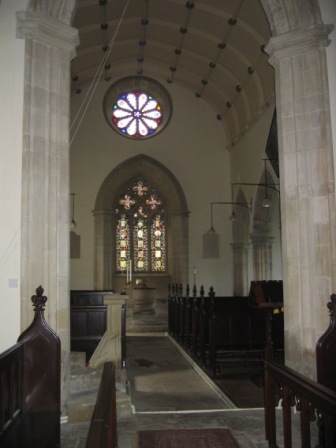 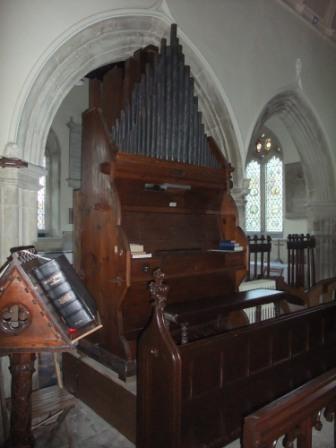